In this article, we share a strategy for manufacturing process optimization with Industrial Internet of Things (IIoT). We do this based on the 5 steps of Lean with the DMAIC cycle.

Machine data is crucial to gain insight into and improve production processes. Much has already been published about this in professional literature. If you start to improve production processes based on data, start small. Choose a production line or a part of it. Realize that more is needed than simply the technical aspect of collecting and presenting the data. Employees also need to gain experience to understand the data in order to implement improvements based on it.

The method of improving the production process

The DMAIC cycle (Define – Measure – Analyze – Improve – Control) is a proven Lean methodology to achieve improvements in production processes. Let’s take a look at how these five steps are used in the optimization process. 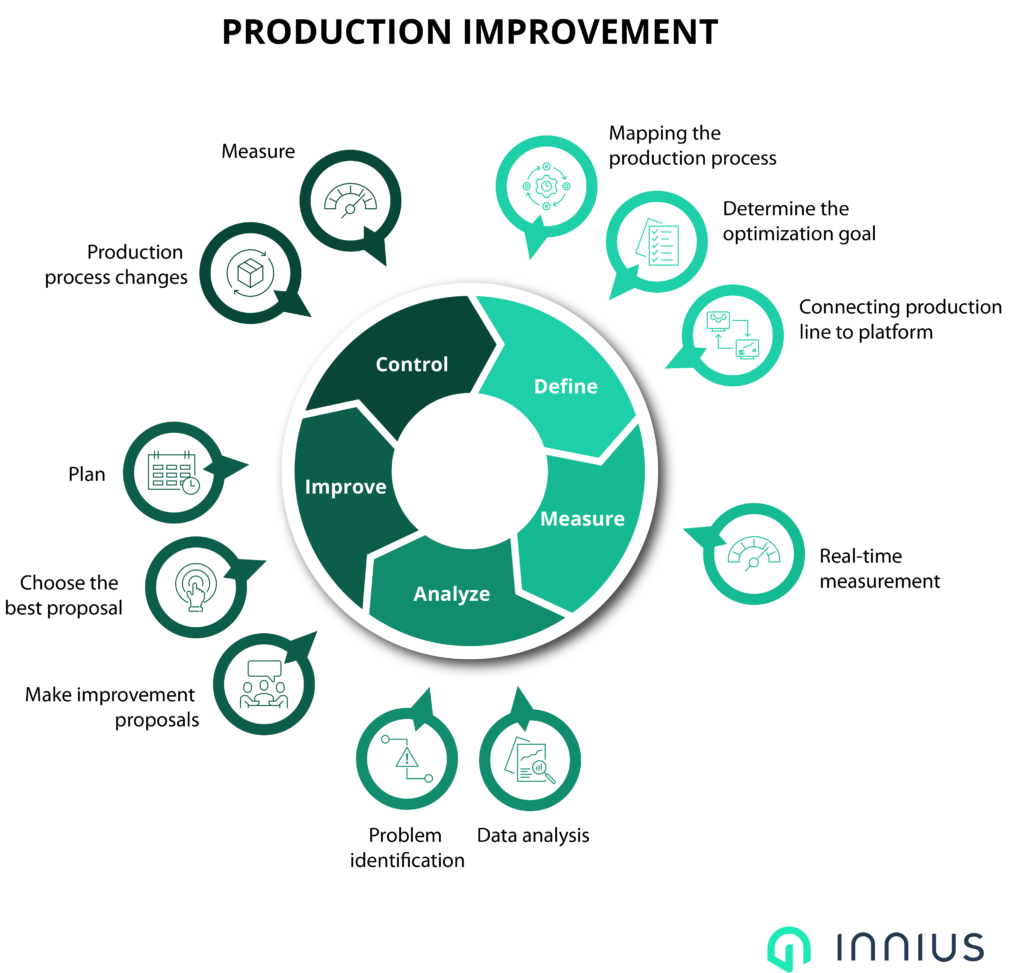 #1: Define – which production line to improve?

After this decision has been made, there are three steps in the Define phase:

2. Determining the optimization goal
Once the production process has been mapped out, it is time to set goals. What do you want to improve? Some examples of improvements could be:

The next step is to determine which machine data is needed to gain insight into the problem. For example, if the goal is to increase the OEE of a production line by 5%, then we need to know what the current OEE percentage is.

#3: Analyze – where to improve the production line?

In the Analyze phase, we will analyze the collected data more deeply. Two weeks of data provides a lot of insight. We look at how the production line behaves to determine where improvements are needed to achieve the set goal.

Pareto analysis
Back to our example where the goal is to increase OEE by 5%. There we analyze the data where we see deviations in the performance of the machine. A simple line graph, which compares the maximum performance against the actual performance, provides direct insight into where there is a potential bottleneck in the process. A pareto analysis (80% of the problems can be traced back to a few problems ~20%) provides a simple insight into which ‘stops’ have occurred and how long they have lasted. From this we can conclude which stops we need to solve first to increase the availability of the product line. We also analyze how the quality produced was based on the data. This analysis provides input for the next step.

Identify problems
Based on the analysis of the data from the previous step, we identify the problems, and determine which problem we will solve. Normally, this is the problem that takes the most value from the stated goal. In our example, the low availability of the production line could be the problem of the low OEE. Solving this contributes the most to the goal of increasing OEE by 5%. We then focus on the problem that emerges from the pareto analysis. In other words, the problem that causes the longest downtime. Now that we know this, we can move on to the Improve phase.

#5: Control – did the adjustment have the desired result?

In this step, measurements are used to check whether the implemented improvement has had the desired result. The chosen solution may require an adjustment in the production process. All production employees must of course be aware of this and be trained where necessary.

In our example, it may be that the production line has been idle the longest because the supply of raw materials is not on time and conducted correctly. It is not a technical problem but an organizational problem. Those involved in this part of the process must be informed and trained in the adapted production process.

When this is done, comes the step of measuring the outcome of the improvement made. In our example, we regularly check whether the OEE percentage is increasing. This is also done with the pareto analysis report, to see if the downtime is decreasing.

Finally, we would like to mention several pitfalls that must be avoided in this process. These are: